Phoenicians
The investigation of the Phoenicians on the coast of Velez-Malaga has a long history, a present and a future. It is the work of many researchers and his teams: scientists, students, technicians and workers, each of them helping the knowledge of history and of the Phoenicians settled on this coast. The first news of about the phoenicians was in 1792, when deposited in the Museum of Natural History in Madrid two jars of red varnish and alabaster urns found in the vicinity of the Casa de la Viña. It formed part of the trousseau of a Phoenician tomb of the seventh century BC. These findings are preserved in the National Archaeological Museum in Madrid. To Vélez-Málaga 1930 would have been memorable if the importance of chance discovery of the tomb 1 Trayamar had been recognized, but went unnoticed by archaeologists until in 1964 the son of the owner of the farm, visited the excavations of the Institute German archaeological at Cortijo Los Tuscans. 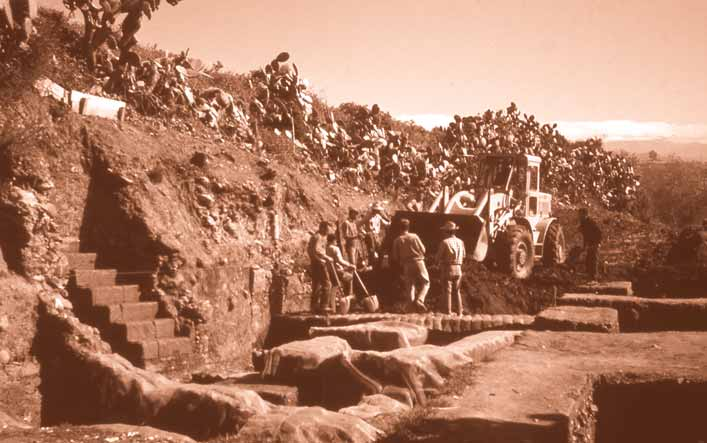 The Roman occupation
The Roman occupation, is avident in different fields, but especially in the Cerro del Mar, remains of what was the necropolis of the maritime city of Maenoba, located in the area of Torre del Mar. The Romans developed the salting industry and production of garum, whose foundations had already laid the Phoenicians. An incipient agriculture and fishing were also developed at this time.
As similarities in other areas of Malaga interior, the land that forms part of the basin of the river Velez, also remained an important occupation in Roman times, practically silenced by sources, perhaps because of the lack of events or major urban centres.
The best land, concentrated in the Flisch of Colmenar-Periana will be occupied and exploited to advanced time of Under Empire. At the same time, it is an area with significant communications with both the coast and the Granada and Antequera interior.